AS PLAYOFFS LOOM, HI-Q TEAMS WORK TO ADD POINTS TO THEIR SCORE

Springfield’s Hi-Q team brought their game faces to their home contest on Monday, January 27. Knowing playoffs were within reach, they 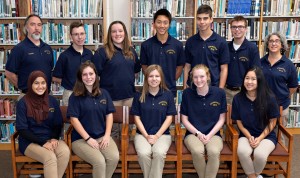 worked hard to accrue as many points as possible. The hosts only missed one question in the first half. Both Chichester and Upper Darby weren’t far behind, neck and neck at intermission. The second half proved to be the winning piece for Springfield, as they answered all their questions correctly and picked up bonus points to become only one of two teams to score 60 or more points this season. Final scores: Springfield: 60; Chichester: 19; Upper Darby: 29

Penn Wood High School played host on Wednesday, January 29. The contest kicked off with a performance of the National Anthem from the Penn Wood marching band.  At the half, Penn Wood and Chester High Schools were tied, with Valley Forge Military Academy just 1 question behind. Penn Wood pulled ahead in the early part of the second half, but Valley Forge kept fighting, by sweeping the World History category. 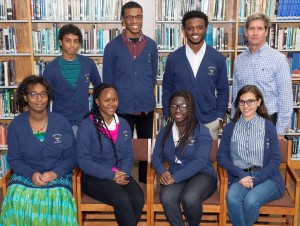 In the end, Penn Wood was able to hang on to the win at their home contest. Final scores: Penn Wood: 21; Valley Forge Military: 18; Chester: 9.

Competition moved across Delaware County to Garnet Valley High School on January 31. The Jaguars played host to Marple Newtown and Penncrest. The home team just came off setting a Hi-Q points record and the anticipation was evident throughout the packed auditorium. Garnet Valley took the early lead after only one category but Marple Newtown quickly racked up enough points to take first at the half with only two points separating Garnet Valley and Penncrest.  The contest became even closer late in the game when Penncrest held 42 points to Garnet Valley and Marple’s 41 points. It all came down to the last question, a Toss-Up in Math, when Marple came up with the correct answer for the win and enough points to stay in playoff 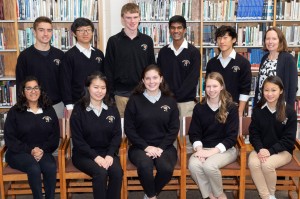 The regular season wraps up this week with contests at Interboro, Academy of Notre Dame, and Haverford High Schools. The results of those final three contests will determine playoff positions. The season’s top-scoring team will host the Championship and the next six teams will compete in the semi-final round.