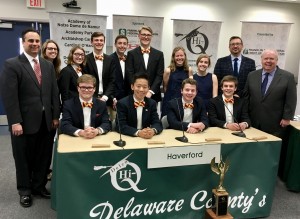 The national championship meet was similar to all Hi-Q meets in scope, scoring, and subject matter. Teams answered a total of 16 questions, including toss-up sports, math, and team choice with the twist of competing over the internet. Delco Hi-Q Director, Rick Durante started the match with greetings from the Keystone State before turning over the program to longtime Quizmaster Tom McCarthy. McCarthy presided over the very first National Championship in 1981 when Pennsylvania hosted teams from Ohio, Wisconsin, and Washington. Haverford prevailed that year and did it again using modern video-conference technology.

It didn’t take long for teams to get used to watching each other on a big screen while four different Quizmasters posed questions. All four teams started strong with correct answers across the board in Current Events. Golfer Se Ri Pak was the answer to a tough Sports question and Haverford was the only team to provide the correct answer. Those four points gave them the lead in the middle of the first half. Monroe was close behind but Haverford took off and never looked back. At the half, Haverford was ahead with 30 points, Davidson was in second with 24, and Monroe and Peshtigo were in a third place tie with 20 points apiece.

Haverford went on to have a strong second half, only missing their Physics question. By the time the last question was posed to teams in Math, Haverford had already secured first place to keep the national title in Pennsylvania while the other three teams battled for positions. The final score was Haverford 58, Davidson 40, Peshtigo 36, and Monroe 28.

DCIU hosted a reception for the teams in the adjacent Delco Hi-Q Hall of Honor where the team had a chance to reflect on their two championships amongst the photos of some of Delco Hi-Q’s prestigious past contestants.

Haverford advanced to the national level after securing the Delco Hi-Q title last month in a match against this year’s finalists Radnor and defending Delco Hi-Q and National Champions Garnet Valley. They will represent Delaware County in next month’s Pennsylvania Academic Quiz Competition in Harrisburg.

We can’t do it without you! Join FMFCU Partners in Education to support Delco Hi-Q and a host of initiatives aimed at academic excellence. Visit fmfcufoundation.org to learn more.