Delco Hi-Q Round One Ends With Chichester, Springfield, and Garnet Valley Victories

The first round of Delco Hi-Q competitions continued this week with teams battling for points in the nation’s oldest continuous academic quiz competition.

The week started with a trip to Radnor Township on December 10th where Valley Forge Military Academy hosted Cardinal O’Hara, and Chichester High Schools. The teams’ hot start took the chill out of the air of Mellon Hall when all three teams scored on the first question in Current Events. The early contest was extremely close with only one point separating each team at halftime. 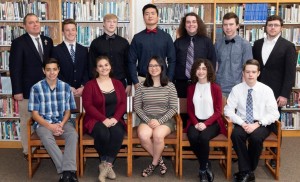 Chichester held on to their mid-way lead and separated from the competition, while Valley Forge and O’Hara battled for second place throughout the second half. A correct answer in World History from Valley Forge earned them a tie with O’Hara at the end of play. Final Scores: Valley Forge, 26; Cardinal O’Hara, 26; Chichester, 34.

Academy of Notre Dame de Namur in Villanova was the setting for the sixth contest of the season on December 11th. The entire school was on hand to see The Christian Academy and Springfield High School take on the Notre Dame girls. Springfield took the lead early in the contest. The visiting Cougars missed their own American History question but picked up two points on the other teams’ missed questions. Notre Dame took the lead back late in the half with consecutive answers in Math, Shakespeare, and Geography. At intermission, Notre Dame led with 19 points to Springfield’s 12, and 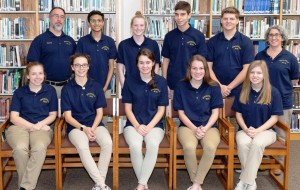 TCA’s 6. The victorious team would be determined by the final question in Math where teams buzz in to give an answer. Notre Dame was ahead by just one point when Springfield buzzed in to take four points even before Quizmaster Rick Durante finished asking the question. Final Scores: Academy of Notre Dame, 31; The Christian Academy, 12; Springfield High School, 34.

Hi-Q moved across Delaware County to Garnet Valley High School for the last contest before the winter break. Garnet Valley hosted Strath Haven and Radnor and the final results showed that it was worth the wait for the home team as they scored a season high of 59 points. The Jaguars were dominant throughout the contest in a nearly perfect game. The team correctly answered every question posed to them in the first half, scoring on the third try in Math. In Hi-Q, teams have four tries to answer in standard categories and each question is worth four points on the first try. The point value is decreased by one with every incorrect answer. Radnor was just a few points 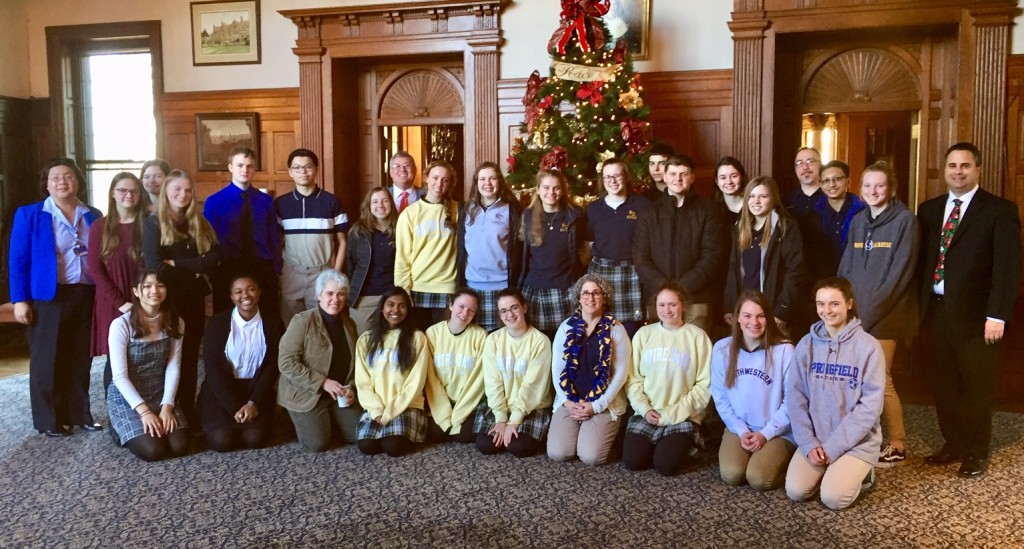 The Christian Academy, Springfield and Notre Dame teams in the Academy of Notre Dame mansion with Quizmaster Rick Durante after their contest.

behind the home team, missing just one question in the first half. Strath Haven had a tough half with only eight points scored but picked up 19 in the second half. Garnet Valley continued their impressive performance after half-time and took the win. Final Scores: Garnet Valley, 59; Strath Haven, 27; Radnor, 33.

Teams have a chance to score more points when round two begins on January 4, 2019 with Upper Darby hosting Garnet Valley and 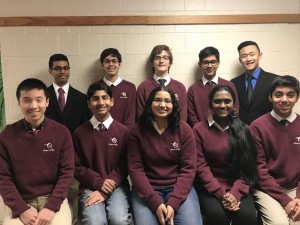