Garnet Valley finished second overall in the regular season and Radnor finished fourth. Both teams won a semi-final match to earn their place at the finals. Delaware County Christian School finished first overall and earned the right to move directly to and host the Championship.

The DeMoss Center at Delaware County Christian School was standing room only with highly enthused spectators filling all available space during the championship battle. Extra chairs were brought in to handle the capacity crowd that included the entire DC student body. Garnet Valley brought their own fan bus with students displaying signs cheering on their team members. Superintendents and administrators from all three schools were in attendance, as well as representatives from the program’s main sponsor Franklin Mint Federal Credit Union and its Foundation, supporters from The Wilbur C. and Betty Lea Henderson Foundation and the Delaware County Intermediate Unit. 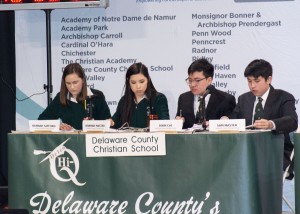 It was a fierce battle for points in the first half as all three teams were tied after the first few categories. Garnet Valley and Radnor took the lead when Delaware County Christian missed their Literature and Math questions. The early tie was broken when Radnor missed in Shakespeare and Garnet Valley and picked up a bonus point by answering this missed question. All three teams were still in contention at the halfway point; Garnet Valley was ahead by five over Radnor and nine points over the home team.

Garnet Valley continued to defend their lead and dominated the second half by scoring points in every category. Even with first place secured late in the half, Delaware County Christian School and Radnor were still locked in a battle for second place which wasn’t decided until the very last question. Radnor used just a few of 60 available seconds to buzz in and correctly answer the Math toss-up, earning second place to end the thrilling match. Final scores: Delaware County Christian School 40, Garnet Valley 64, Radnor, 44 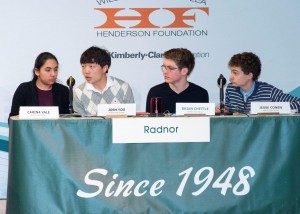 After the contest, Hi-Q Director and Quizmaster Rick Durante commented on the teams’ preparation “The scores earned today show how hard these teams have worked to get here. Hi-Q is a tough competition and especially so during a championship contest.”

This win gave Garnet Valley its fifth Championship title since 2011, for a total of nine since their first win in 1978. This was the team’s sixth consecutive Championship appearance and twenty-fourth overall. Faculty Advisor Lesley Arensberg has been coaching the team for 13 years and fellow advisor Sandra Dubnansky is in her eighth year. The coveted Donna Zerby Trophy will be theirs for the next year after spending two years at Haverford High School.

In addition to the trophy, Garnet Valley’s Hi-Q team earned $3,000 for their school. Second place Radnor earned $2,500 for their school, and Delaware County Christian School, earned $2,000. Garnet Valley will represent Delco Hi-Q in the Hi-Q National Championship on April 5th in an online contest against regional Hi-Q teams from Alabama, Washington, and Wisconsin and will represent Delaware County at the Pennsylvania Academic Competition on April 26.

The teams will receive their cash awards and recognition at the annual Partners in Education Celebration, May 2 at Drexelbrook Corporate Events Center. More than 600 students, parents, teachers, and community leaders will attend the region’s premier academic recognition event. 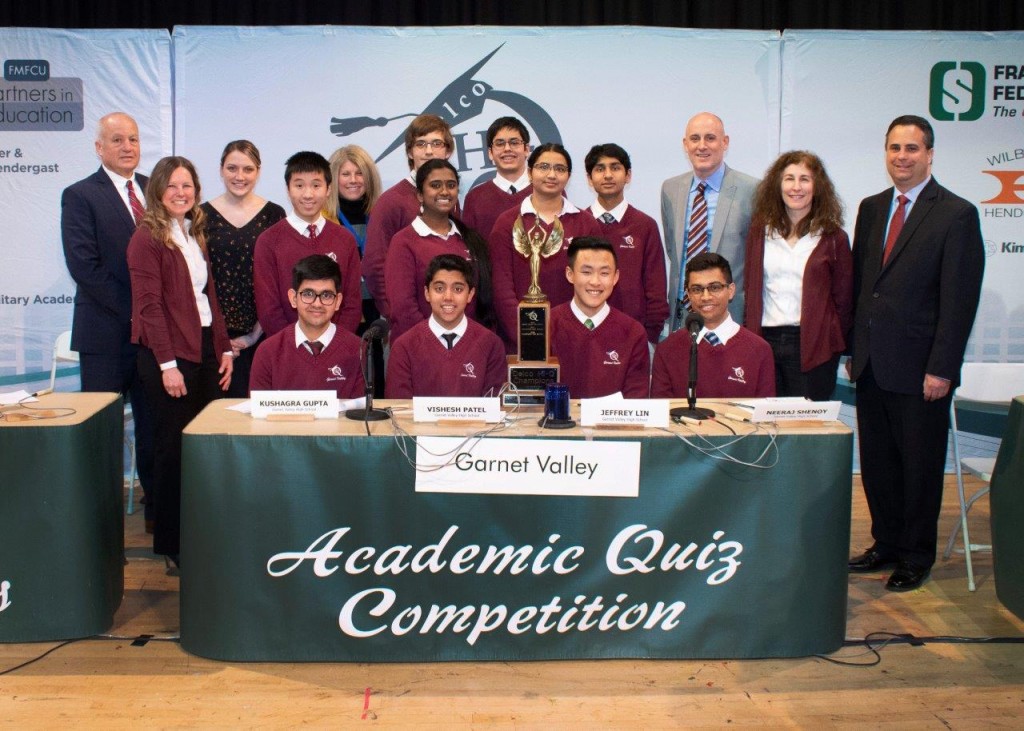