Upper Darby and Haverford Earn Wins to Open the Season

The oldest continuous academic quiz competition in the United States kicked off the 73rd Season a little differently in 2020 with a virtual format. The socially distanced format allows teams to compete without meeting in person.

The second contest on December 2nd was another close one as Haverford, Ridley and Springfield High Schools competed in 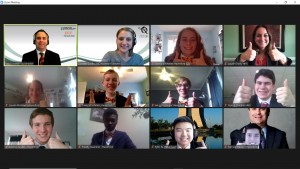 cyberspace. An early lead was secured by Haverford as they answered 7 out of the 8 first half questions correct on the first try. Ridley and Springfield stayed close behind, but ultimately couldn’t catch up. Final scores: Haverford- 48, Ridley- 42, Springfield- 35.