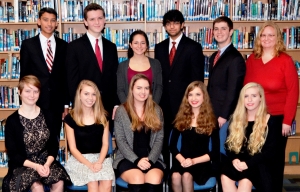 Reigning Delco Hi-Q champs Penncrest High School routed their competitors to rack up 62 points, the highest score in a single meet so far this season. Dr. Joseph O’Brien, FMFCU Foundation Board Member and CCIU Executive Director, provided opening remarks Wednesday at Chichester High School. It was a banner day, as both the home team and Springfield earned respectable scores, too. Chichester earned maximum points for six correct answers. Springfield did the same and was able to answer the toss-up sports question. The Cougars only missed two regular questions but were able to pick up three bonus points. Bonus points gave Penncrest seven extra points plus they were able to answer all but one regular question correctly on the first try. Hi-Q meets are comprised of 16 questions, each worth four points. With the exception of three toss-up questions, teams have four tries within a limited time to provide the correct answer. One point is deducted for each incorrect answer. Teams can earn one bonus point for being the first to buzz in with a correct answer to a missed question. Final scores: Penncrest 62; Springfield 41; Chichester 30. 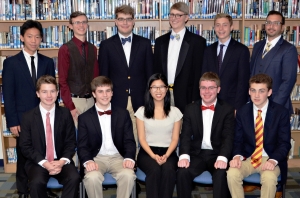 Strong knowledge of history and science catapulted Haverford to a win Thursday at The Christian Academy. The Fords were the only team to correctly answer the toss-up sports question, and they picked up six bonus points. The home team held its own, earning maximum points for five regular questions and their team choice toss-up, which was literature. Upper Darby showed strength in history and geography, and was even leading the home team for a time, but lost traction during the second round of questions. Franklin Mint Federal Credit Union Market Manager Michael Cantland offered opening remarks. Final scores: Haverford 53; The Christian Academy 32; Upper Darby 19 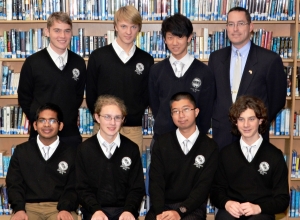 Friday’s contest began on a patriotic note with a beautiful rendition of the National Anthem by the Strath Haven Silvertones. Dr. Harry Jamison, FMFCU Board member, opened the assembly by thanking the enthusiastic audience and team members. The Lions could not overcome the Panthers in this contest. Home team Strath Haven took the lead early and held it, besting Cardinal O’Hara with correct answers to all but one regular question, and showing particular strength in Geography, where they earned maximum points, picked up a bonus point, and successfully scored four points in the team choice category. O’Hara also snagged four points for their team choice subject, which was Shakespeare. The Lions were quick on the draw to correctly answer the toss up math question but the Hail Mary effort was not enough to propel them to victory. Among the spectators were Steven Buxton and Christina Henderson Sotherden, members of the Wilbur C. and Betty Lea Henderson Foundation board, which is one of Delco Hi-Q’s major funders. An exhibition team comprised of Cardinal O’Hara and Strath Haven comprised the third team due to the absence of Chester High School. Final scores: Strath Haven 49; Cardinal O’Hara 21

Coincidentally, two meets are scheduled next week and both will be held on the Main Line. Archbishop Carroll hosts Delco Christian and Bonner & Prendie Wednesday. Radnor High hosts Garnet Valley and Ridley Thursday.