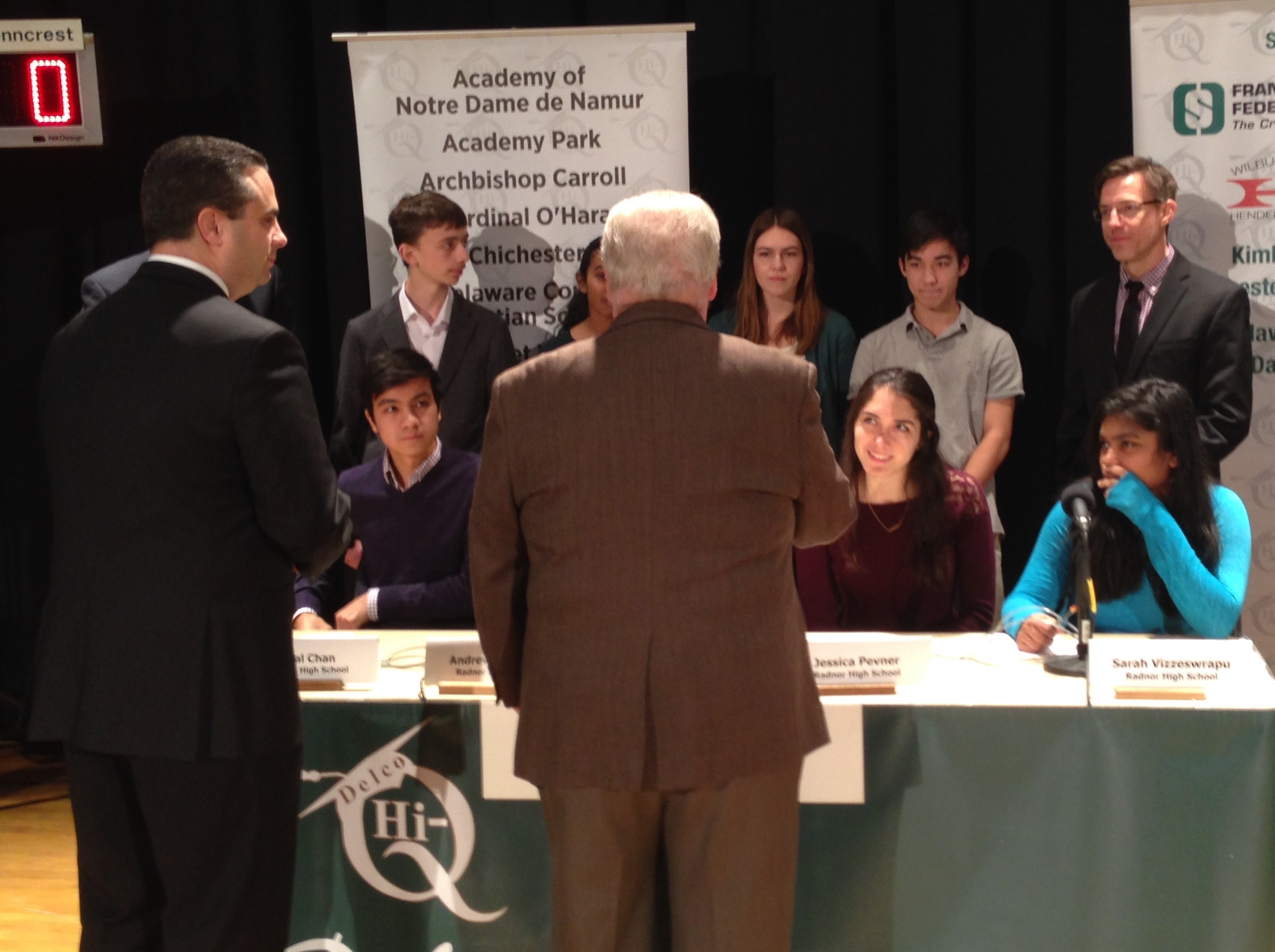 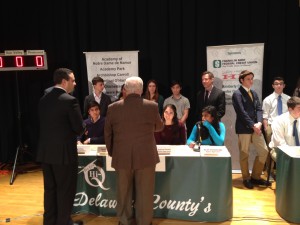 The 69th Season of Delco Hi-Q proved to be a banner year for Radnor Township. The Raiders tallied 173 cumulative points, making them fierce competitors for semi-final competition. Just which teams will make the finals will not be determined until six more teams compete in their final match-ups.

On February 2, Dr. Harry Jamison, Franklin Mint Federal Credit Union board member, kicked off the Radnor High School home contest with opening remarks. Radnor had a near perfect game against last season’s finalists Penncrest and Sun Valley. They volleyed with the Penncrest Lions for the lead early in the game, each team earning three bonus points in the first half, but correct answers to seven of the eight questions in the second half secured their victory.

Delco Hi-Q’s first of two contests in Radnor Township last week had Valley Forge Military Academy hosting their first-ever Delco Hi-Q competition on February 1, as the cadets are new this season to the academic quiz competition. Home field was an advantage for VFMA, which hosted Academy Park and Cardinal O’Hara. The young men started strong and finished strong, showing strength in Current Events and History categories. Mellon Hall, on the sprawling VFMA campus spanning Delaware and Chester Counties, was packed with students, which is always good for competitors and certainly piques interest in prospective recruits. This is the time of year when Hi-Q coaches begin eying underclassmen to replace graduates.

Archbishop Carroll logged a victory at the January 30 competition with Bonner& Prendie at Penn Wood High. The pair of Patriots (mascots for both Carroll and Penn Wood) duked it out early on but a string of perfect answers at the competition mid-point enabled Carroll to cruise toward a win. Penn Wood was the only team to correctly answer the Toss-Up Math question. All three teams scored maximum points in Current Events. Carroll racked up the most bonus points—a total of seven.

The regular season wraps up with two competitions next week. Haverford High School will look to add to its impressive 124 point total when they face The Christian Academy (host) and Strath Haven on Monday. Marple Newtown hosts Ridley and Garnet Valley on TuesdayThe season’s top scoring team will move directly to the Championship. The next six highest scoring teams will compete in the semi-final rounds for a chance to compete in the Championship on March 7.