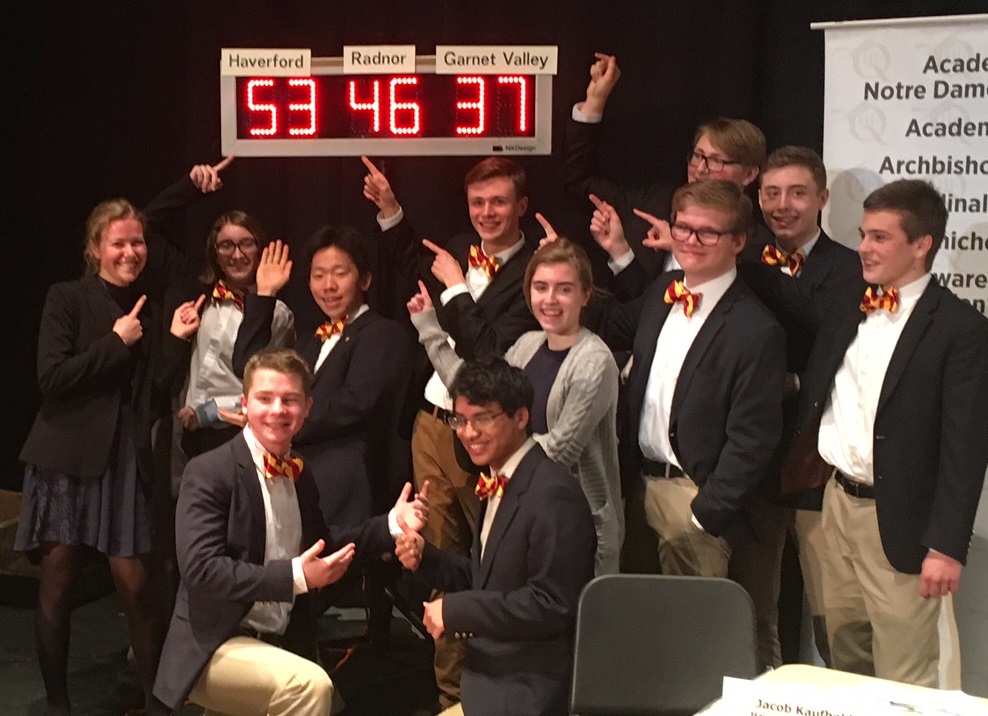 Haverford High School’s 2016-17 Delco Hi-Q team decisively won the championship title in perhaps the most competitive match up of the season. The Fords automatically advanced to the championship round when they finished the 69th season with the highest score among all 21-participating team. Competitors Radnor and Garnet Valley High Schools finished second and third respectively but had to defend their positions in semi-final rounds of the nation’s oldest, continuous academic competition, which they did.

Haverford’s auditorium was overflowing with students and spectators during the championship round, Tuesday, March 07, 2017. Superintendents and administrators from several school districts were in attendance, as well as representatives from the program’s key sponsor Franklin Mint Federal Credit Union and its Partners in Education Foundation supporters The Wilbur C. and Betty Lea Henderson Foundation and the Delaware County Intermediate Unit.

Out of the gate, all three competing teams answered the first two categories correctly on the first try, creating a three-way tie. Biology was a bit of a challenge for the teams, two of which provided correct answers but were unable to earn maximum points because they used more than one try. Although the teams volleyed for the lead early on, Haverford edged their competitors at the midpoint and cemented a commanding lead during the second half of the competition, while Radnor and GVHS traded second and third positions. Late in the second half, Radnor and defending champs Garnet Valley were tied for second. A missed question in American Government gave Radnor the second place spot with just a few categories remaining. The visiting Raiders went on to take the Math toss-up question for four more points but it wasn’t enough to overcome Haverford’s lead. In the end, the teams finished in the same positions they ended the regular season. 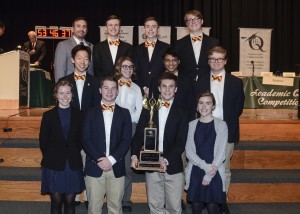 Today’s win gave Haverford its tenth Championship title in its twentieth Championship appearance since 1955. Faculty Advisor David McCauley is in his fourteenth year of leading the team. The coveted Donna Zerby trophy will be theirs to defend during the 2017-18 season. In addition to the trophy, Haverford’s Hi-Q team earned $3,000 for their school. Second place Radnor earned $2,500 for their school, and last year’s champs, Garnet Valley, earned $2,000. Haverford will represent Delco Hi-Q in the Hi-Q National Championship on March 30th in an online contest against regional Hi-Q teams from Alabama, Washington, and Wisconsin.

The teams will receive their cash awards and recognition at the annual Partners in Education Celebration, April 27 at Drexelbrook Corporate Events Center. More than 600 students, parents, teachers, businesspeople, and local dignitaries will attend the region’s premier academic awards ceremony.