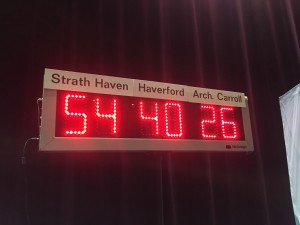 The regular season of Delco Hi-Q has come to a close with the final meets held last week and today, two of which were rescheduled several times due to extenuating circumstances. Strath Haven’s home meet with Haverford and Archbishop Carroll was delayed almost a month. All teams were eager to see the outcome of this match as these three teams are strong playoff contenders, but perhaps none more eager than Strath Haven, which started and finished strong. Out of the gate, the Panthers dominated, answering six of the first eight questions correctly on their first try and the only team to correctly answer the toss-up sports category. The home team was well aware of their talented competitors, especially the Fords who were quick on the buzzer and racked up five bonus points. Carroll missed the playoffs but finished with one of their best overall seasons. Final Scores: Strath Haven 54, Haverford 40, Archbishop Carroll 26 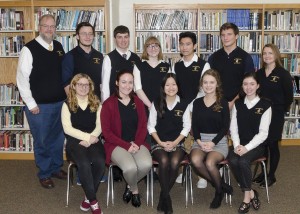 On Friday, Interboro hosted its much anticipated match-up with Chichester and Cardinal O’Hara. This competition had also been postponed several times, resulting in a smaller team for COH. The Lions had the brainpower they needed, though, and managed to accumulate 25 points, including two bonus points. Chichester picked up three bonus points in this meet, and though they staved off O’Hara during the first half both their competitors rallied passed them in the second half. The Bucs held the lead throughout the game, picking up an impressive seven bonus points along the way and showing particular strength in history, current events, and literature. The home team finished with their best score in a decade. All three teams correctly answered the toss-up sports question. Final Scores: Interboro 47, Cardinal O’Hara 25, Chichester 19 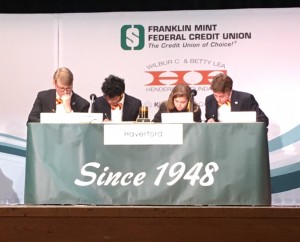 Last Tuesday, Penncrest hosted Delaware County Christian School and last year’s champions, Haverford High in a very competitive match-up. Every point was a big deal to these teams as they strove to improve their cumulative scores and land a place in the finals. After a strong start, the lead toggled between Delco Christian and Haverford. All three teams correctly answered the toss-up sports and their team choice questions but by the last quarter, Haverford had taken a strong lead, leaving the home team and Delco Christian to vie for second. Few bonus points were up for grabs, so earning as many points in each category by answering correctly on the first try was vital. Final Scores: Haverford 56, Delco Christian 49, Penncrest 44

The milestone 70th Season of Delco Hi-Q will go down in the history books as a very competitive one with continually fluctuating standings throughout the season. The team with the highest cumulative score will advance directly to the championship round. The six highest scoring teams that follow will battle it out during semi-final playoff competitions February 20 and 22. The official ranking and playoff schedule will be released later this week.