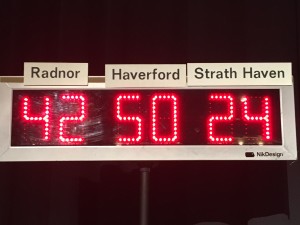 Haverford’s Hi-Q team aims to defend their championship title after defeating Radnor and Strath Haven in semi-final action. The Ford’s ability to rack up ten bonus points compared to six for the Raider’s kept them ahead of the competition despite several close calls. The blow was a huge disappointment to host team Radnor, which ended their regular season 29 points ahead of Haverford and 36 points ahead of Strath Haven. The Panthers struggled during the first half of the competition and were never quite able to rally enough points to be competitive. All three schools had support from parents and fellow students who attended Tuesday’s playoff. Dr. Lois Snyder, FMFCU Partners in Education Board Member, delivered opening remarks. Final Scores: Haverford 50, Radnor 42, Strath Haven 24 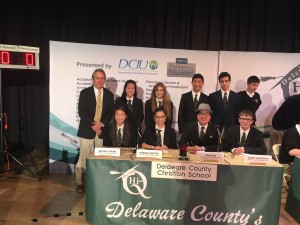 Having finished the regular season with the third highest cumulative score, Delaware County Christian School hosted Marple Newtown and Penncrest Wednesday in the second round of playoffs. Marple held a commanding lead by the game’s midpoint and it appeared they would sail to the winner’s circle, but three missed questions allowed their competitors to catch up and the contest took some dramatic turns before a tie-breaker ended it. Penncrest and Delco Christian gathered steam and by the final question in math, the home team and Marple were tied with Penncrest behind by only two points. The first to buzz in with the correct answer would have won the day. Instead, none of the teams came up with the correct answer. Penncrest was eliminated with 42 points, while DC and Marple Newtown remained on stage for the tie-breaker—a series of six questions that each team had to answer in writing within 20 seconds each. It was the first semi-final tie in 12 years. Both teams correctly answered the same four of the first five categories, and the competition came down to the final question in the Shakespeare category. Students at Delco Christian went wild when their team emerged victorious. Final Scores: Delaware County Christian School 44, Marple Newtown 44, Penncrest 42. Tie-breaker Scores: Delaware County Christian School 20, Marple Newtown 16

Delco Christian and Haverford will travel to Garnet Valley to battle for the Donna Zerby trophy in the championship round of the 70th Season of Delco Hi-Q. The team that takes the crown will then move onto the national Hi-Q Championship, April 13, where they’ll compete against three regional Hi-Q champs from other states via videoconference. 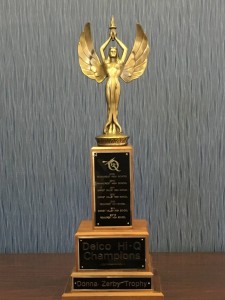 Garnet Valley has a long history of successful Delco Hi-Q seasons. The school has earned four titles since 2011, for a total of eight since their first win in 1978 and placed third last season. This is the school’s twenty-third championship appearance since 1977. Faculty Advisor Lesley Arensberg has been coaching the team for twelve years and fellow advisor Sandra Dubnansky is in her seventh year.

Defending Champions, Haverford High School makes its twenty-second Championship appearance dating back to 1955. The school holds ten Championship titles since joining Hi-Q in its inaugural 1948-1949 season. Faculty Advisor Laurie Grady is in her first year of leading the team.

Delaware County Christian School joined the competition in the 1990’s and is making their fourth overall championship appearance. The school placed third in 1995, 2006, and 2012. Team coach Thom Houghton is a nineteen year faculty advisor.

Prizes will be awarded and all Delco Hi-Q teams will be recognized at the annual Partners in Education Celebration being held April 19 at Drexelbrook Corporate Events Center. More than 600 students, parents, teachers, businesspeople, and local dignitaries will attend the region’s premier academic awards ceremony. Delco Hi-Q students and their faculty advisors attend the Celebration at no cost. Supporters of Hi-Q and other programs recognized at the region’s premier academic achievement event can purchase tickets. Sponsors are also welcome! Information can be found at PartnersInEducationFoundation.org.