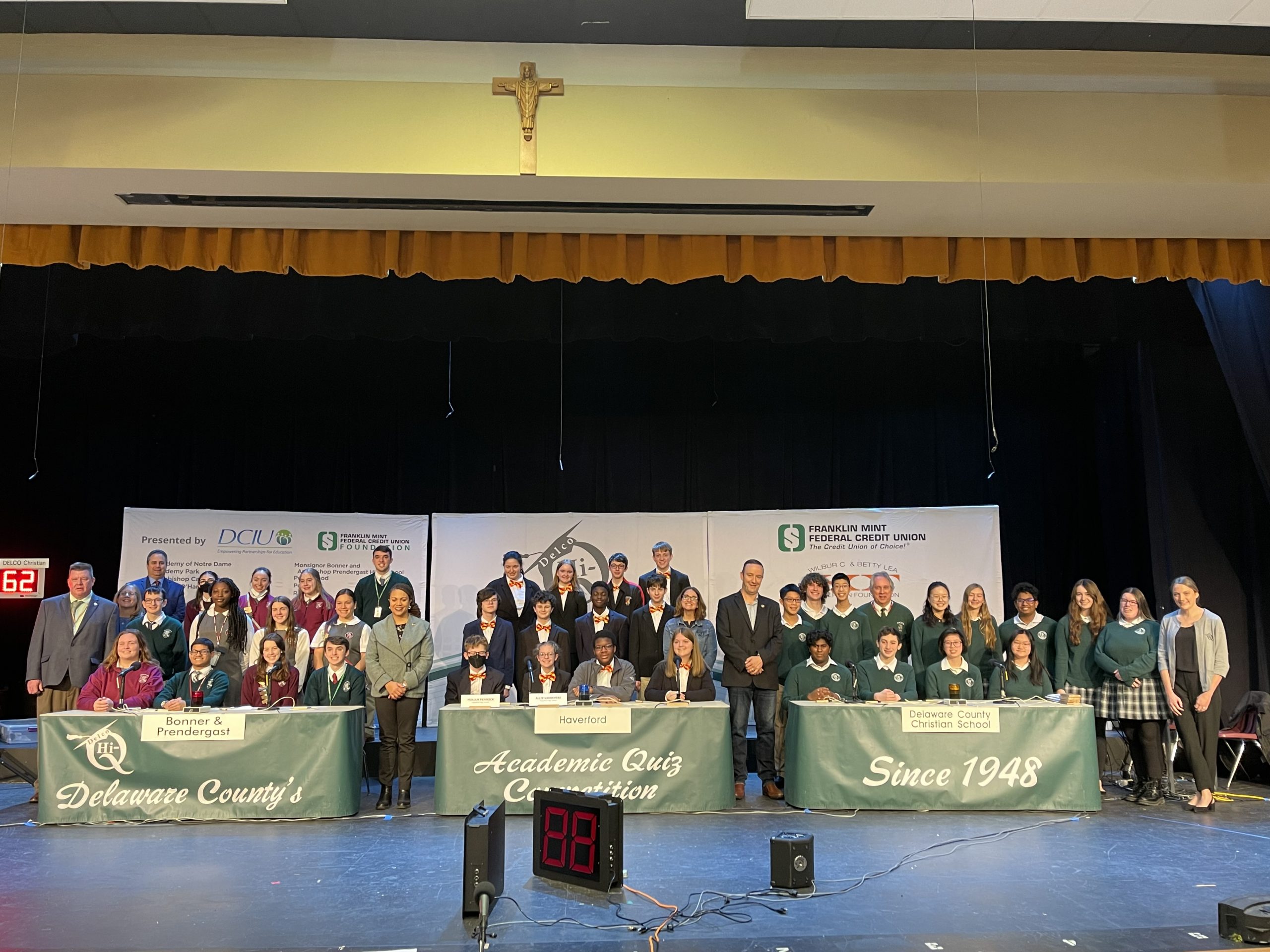 January 13, 2023 (Chadds Ford, PA) – Six teams competed for the second time in Delco Hi-Q 2022-2023 Season this week. In both contests visiting teams were able to secure the win, but all teams had the opportunity to add points to their final score.

Bonner Prendie High School hosted the competition on January 11 for their opponents- Haverford High School and Delaware County Christian School. State Representatives Curry and Zabel attended the contest.  At the start of the contest, Delaware County Christian School proved they were going to be a tough competitor- they answered their own Current Events question correctly and picked up bonus points when both other teams missed. As DCCS pulled ahead, Bonner and Prendie and Haverford remained neck and neck.  At intermission, DCCS led by 26 points. DCCS continued to pick up bonus points and answer their own questions correctly, giving them the season high score of 62. Haverford and Bonner and Prendie remained close throughout the contest, changing second place 3 times. Final Scores- Bonner Prendie: 21; Haverford: 23; Delaware County Christian School: 62.

On Thursday January 12 Penncrest High School and Academy of Notre Dame traveled to Valley Forge Military Academy. Throughout this competitive contest there were four lead changes. It was Academy of Notre Dame that captured the lead first, early in the competition. By halftime, Penncrest was in the lead by 1 point. In the second half, Penncrest was able to take a more dominating lead by answering their own Team Choice and the Team Choice Toss Up correctly along with picking up 5 bonus points. Final Scores- VFMA: 16; Penncrest: 35; Notre Dame: 20.

Delco Hi-Q will continue on Monday, January 23 when Marple Newtown and Interboro head to Academy Park High School. On Tuesday, January 24 Upper Darby High School will host Garnet Valley and Chichester High Schools in the last contest of Round 2. After that, each team will compete in one more contest ahead of playoff positions being determined.

To see the scoreboard and schedule, and to learn how Hi-Q competitions work, visit www.DelcoHiQ.org. Follow us on Facebook, to get breaking Delco Hi-Q news.