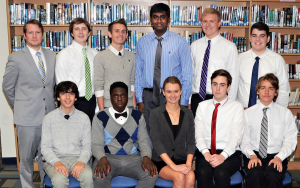 Ridley High School’s Delco Hi-Q team remains in playoff contention after wrapping up with their best score of the season. Every point in the third round is important since it is the last chance to boost scores.

Cumulative scores from all three contests determine playoff positions. Coming into this round, Ridley was tied with Haverford for that last playoff spot, with several teams very close behind. The home team in Wednesday’s match was four for four in subjects under the toss-up question categories and earned maximum points for seven regular category questions. The Raiders proved knowledgeable in all subject matter, especially History, which comprised two of their five bonus points and helped catapult them past Academy Park. The Knights made a valiant effort, picking up four bonus points and showing strength in World History and Geography. It was a two-team match since Chester is not participating this season. An exhibition team filled out the three team contest.

A washout Friday forced a rare double header for Monday. The added contest at Springfield with Academy of Notre Dame and Radnor will be held at 12:50 p.m. The first meet of the day has Penncrest hosting Marple Newtown and Haverford. If Mother Nature cooperates, Bonner & Prendie will host Upper Darby and Strath Haven on Tuesday and Delco Christian School will host Sun Valle and Garnet Valley on Thursday, February 11. Prior to the Semi-Final round, one makeup game is slated for Tuesday, February 16 between Cardinal O’Hara, The Christian Academy, and Archbishop Carroll.

Click here to view the updated schedule and scores.