First Leg of 69th Season Wraps Up with High Scores

Each of the 21 participating Delco Hi-Q teams have their first competition of the 69th season under their belt going into the holiday break. High scores mark the final week of the first leg of competition. 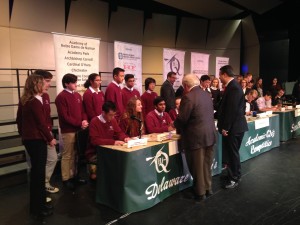 Last year’s champs, Garnet Valley, hosted a very competitive match with Haverford and Radnor. The three teams earned 161 combined points, the most of any match-up so far this season. Because there were few missed questions, there were few opportunities to earn bonus points. Preparation and practice were evident among all teams. In the end, however, Haverford High School emerged victorious having missed only two questions and answering all but one other correctly on the first try. Haverford was also the only team to pick up bonus points for correctly answering the few questions missed by their competitors. The three teams demonstrated dexterity among subject matter, including sports.

Springfield and Marple Newtown traveled to Penncrest for the second match-up of the week. The visiting teams proved to be challenging out of the gate, with correct answers to questions in the first four categories—Current Events, American History, Biology, and Sports. Correct first-try answers to the following four categories put the home team ahead of their competition by the mid-point but they would then trade the lead with Marple Newtown in the beginning of the second half before emerging victorious. Springfield and MNHS flexed history muscle, but Penncrest sealed a victory with prowess in math and literature. Springfield’s final score is pending an appeal, which is an option faculty advisers have the liberty of exercising when facts are in question. Following the contest, Marple Newtown gained one point on a successful appeal and Springfield lost two points on an unsuccessful appeal.

Delco Hi-Q will be on hiatus during the holidays. Competitions resume January 4, 2017 when Sun Valley hosts Cardinal O’Hara and Penn Wood in the first of three meets that week. Chichester welcomes Bonner & Prendie and Ridley on the 5th, and Upper Darby and Valley Forge Military Academy will visit Haverford High on the 6th.