2015-2016 Season Champions Garnet Valley High School hosted a very competitive match December 12. In what was the first competition for the host team and their guests Haverford and Radnor High Schools, 161 points were earned, the most in any match-up so far this season. As for duration, this was the quickest match so far, as well, because combined the teams answered correctly on their first try more than three quarters of the questions posed to them. Also, because there were few misses, there were few opportunities to pick up bonus points. 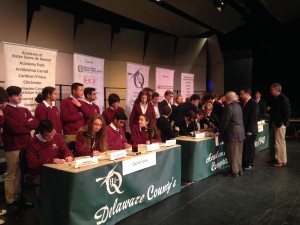 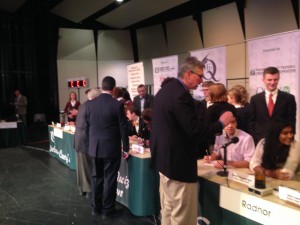 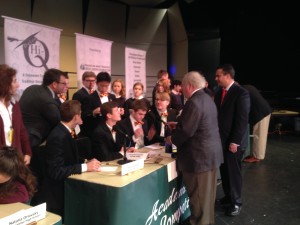 (Photos taken prior to the beginning of the competition)

In the end, Haverford High emerged victorious with a total of 59 points. Radnor and GVHS followed closely behind with 54 and 48 points respectively.

Evident was the fact that all three teams prepared and practiced, which means they studied hard and conditioned themselves to recall and respond under the pressure of a clock.

Kudos to their faculty advisers, a.k.a. coaches, who invested time in these talented students, making their schools proud.

Delco Hi-Q’s 69th Season is still young. Click here to see the schedule for the rest of the season.