Special recognition of the 70th anniversary of Delco Hi-Q, a tribute to longtime retired Hi-Q Quizmaster Tom McCarthy, and the posthumous induction of FMFCU CEO John D. Unangst into the Delco Hi-Q Hall of Honor made the 2018 Partners in Education Celebration a sentimental and memorable occasion. Behind the scenes, the personal connection of a scholarship winner’s family to Franklin Mint Federal Credit Union epitomized the mission of both the Credit Union and its Foundation. 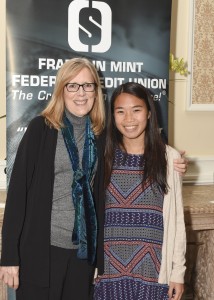 In addition to celebrating 70 years of Delco Hi-Q and its longtime quizmaster, 19 educators received the prestigious Delaware County Excellence in Teaching Award and eleven high school seniors received the John D. Unangst Scholarship. One of those scholars, Kristina McGee of Strath Haven High School, brought her mother, Sharon, who revealed that 18 years earlier the credit union loaned her the money to go to China to adopt Kristina. Full of gratitude and pride, Sharon said she had been a FMFCU member for more than two decades and was not aware of the magnitude of the Partners in Education Celebration until attending last night.

Ridley High School Senior Chris Beyers was also full of gratitude. The FMFCU intern was named Outstanding Student Leader for his work at his school’s Student-Operated Financial Literacy Center. Also attending with his mother, Chris first thanked his fellow Ridley High School interns, saying the award belonged to each of them because they operate as a team. He then gave special thanks to his mother for her support and to Ryan Buchmann, FMFCU Financial Literacy Centers Manager.

Upper Darby High School was recognized as Financial Literacy Center of the Year. The center’s well-spoken president Rylee Curry kicked off the evening with opening remarks. 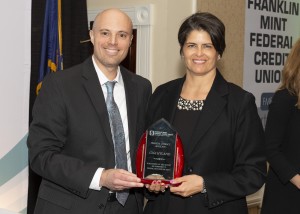 Recognition of the 2018 Financial Literacy Advocate of the Year Gigi Hyland brought national attention to the event. As the Executive Director of the National Credit Union Foundation, Hyland is a well-known supporter of education, particularly financial literacy. She also serves on the advisory board of The Berenstain Bears Financial Literacy Program, which was originally commissioned by Franklin Mint Federal Credit Union in 2012 and is available exclusively to credit unions across the country.

While there was much on which to focus at the 2018 Celebration, Delco Hi-Q and its major supporters received the biggest kudos as the nation’s oldest, continuous academic quiz competition capped its 70th season. All 21 participating Delco Hi-Q teams, the Delco Hi-Q champions, the All-Delco Hi-Q Team, and this year’s Hall of Honor Inductees—Nether Providence High School and Swarthmore College alumnus Thomas E. Spock and former FMFCU President & CEO John D. Unangst—were celebrated.

Tom McCarthy, Delco Hi-Q Quizmaster Emeritus, accepts a special award for his 39 years as the face of Delco Hi-Q from Rick Durante, VP Education at FMFCU

“The annual Celebration is always a big event given the number of awards and recognitions, but the retirement of Tom McCarthy after 39 years as Quizmaster and the contributions of John D. Unangst called for special recognition,” said Rick Durante, Vice President of Education at FMFCU and Executive Director of FMFCU Partners in Education Foundation. “Tom was the face of Delco Hi-Q for four decades. The students loved him and he had an affinity for both the students and the competition. At John’s recommendation, FMFCU became Hi-Q’s major sponsor in 2006, keeping the academic competition in the spotlight.”

In grand style, guests had an opportunity to take a complimentary photo upon their arrival at the 2018 Partners in Education Celebration, and were able to participate in a fabulous raffle to benefit the Foundation. Everyone left with a SWAG bag of goodies donated by sponsors, or Partners. They also participated in a fabulous raffle with items donated

FMFCU Partners in Education is a 501(c)(3) organization whose primary mission is to collect and distribute funds that support education as well as the implementation of financial literacy and youth initiatives in communities served by FMFCU. Visit PartnersInEducationFoundation.org for more information.