Delco Hi-Q is the oldest continuous academic quiz competition in the United States. 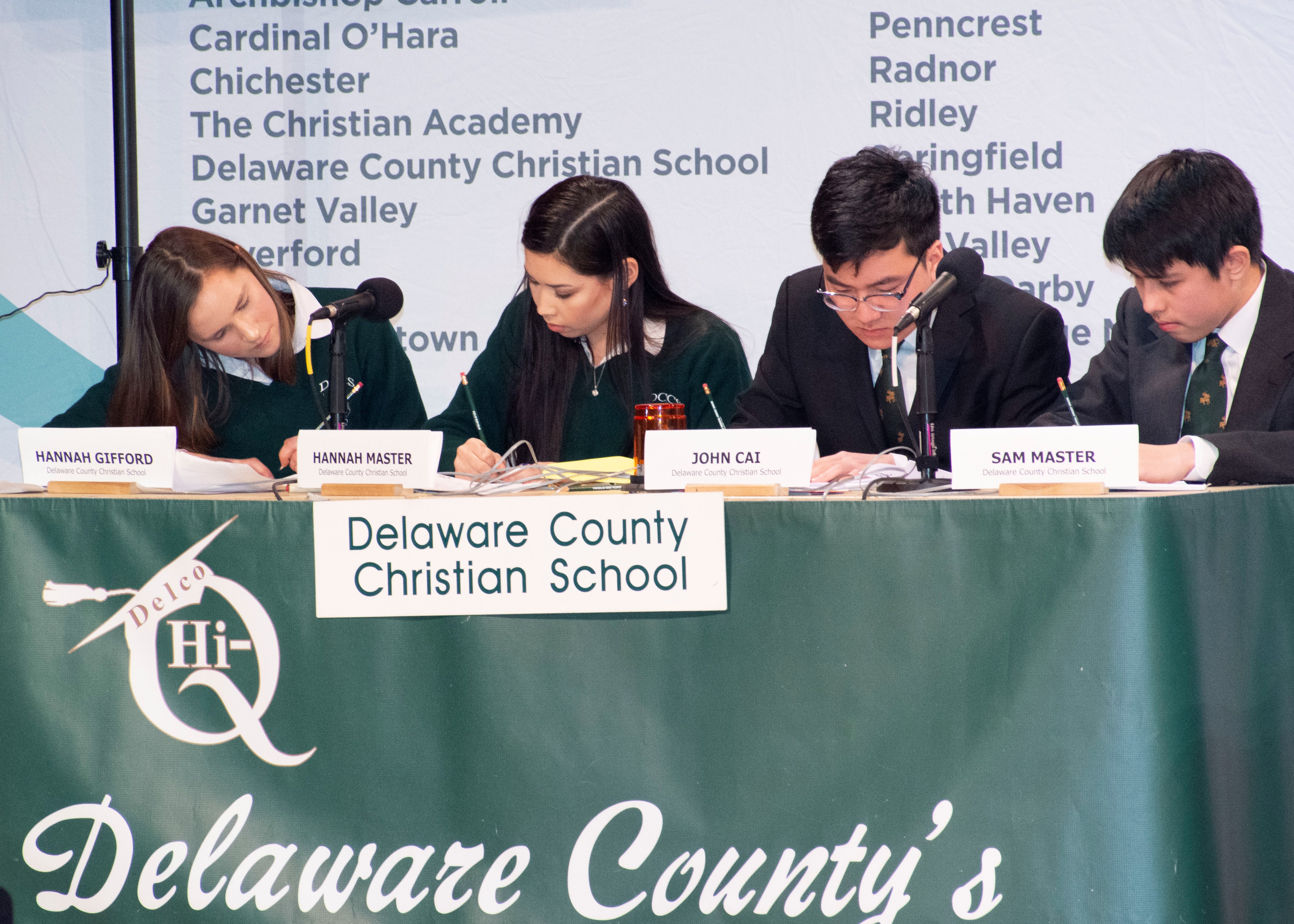 Founded in Delaware County, Pennsylvania, in 1948, the Delco Hi-Q competition began as a community relations program of Scott Paper Company, which was headquartered in the Philadelphia suburbs. The popularity and success of Scott’s Hi-Q prompted it to expand across the country to Washington in 1976, Wisconsin and Michigan in 1977, Maine in 1982, Arkansas in 1984, and Alabama in 1987.

In 2004, seven years after Scott Paper merged with Kimberly-Clark Corporation, Franklin Mint Federal Credit Union (FMFCU) became the primary sponsor of Delco Hi-Q. Consistent with its mission to advance education, FMFCU is committed to promoting Hi-Q, supporting and recognizing academic achievement with the same manner of appreciation shown to athletes.

Twenty-one high schools participate in Delco Hi-Q. Each school team has ten members, and each school hosts one contest during the regular season. Three teams compete at each regular season match, and there are three rounds in each match.

Questions, prepared from 14 subjects, cover standard high school course content as well as general scholastic knowledge that students are expected to have acquired. Guidelines and specific reference material are provided to each team at the start of each season.

The two semi-finalists compete against the season’s highest ranking school for the championship. The winning team is awarded the coveted Donna Zerby Trophy and $3,000 for their school. Second and third place teams earn for their schools cash awards of $2,500 and $2,000 respectively. The Most Improved team also receives a cash award.

All Delco Hi-Q teams are recognized at the annual Partners in Education Celebration, an awards banquet that highlights academic achievements in Delaware County and its neighboring communities.

Participants are asked questions on a variety of subjects. Students are provided with a reference list before the start of each season. 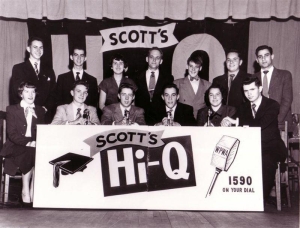 Early one morning in the summer of 1948, two Scott Paper executives, members of the newly formed public relations department, met to create a high school radio quiz program that would represent a constructive contribution to the youth of Delaware County, Pennsylvania, the base of Scott Paper Company operations. Through negotiations with Chester radio station WPWA, Scott’s Hi-Q was born.

Robert O. Johnson, a young man with experience hosting quiz programs, was named quizmaster. Bob researched and wrote the questions, and also coined the name Hi-Q—“Hi” for high school and “Q” for I.Q.

During the first season, 20 schools with teams of four students competed. A series of weekly contests, between two teams at a time, resulted in the selection of five finalist teams. All questions in that first year were based on the current issue of Newsweek magazine. 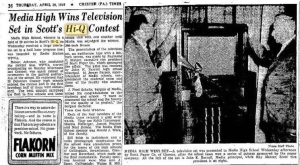 Hi-Q’s first season as a Current Events Quiz, proved to be not very exciting, so a format change was introduced. From 1949 through 1954, contest material was presented in the form of a fictitious story, containing a total of 20 errors. Students identified the error for one point, and corrected it for a second. The quiz was designed to test a general knowledge of history, geography, current events, literature, biography, science, and government. By 1954 it was decided to change the format using direct questions and a new scoring system. Minor changes in 1962 led to a similar format that is used today.

Eventually the radio broadcasts were cancelled as it became increasingly evident that Hi-Q was, and should be, an in-school activity, as much a part of school as classes, athletics, clubs, and all other elements that make-up the full high school experience. 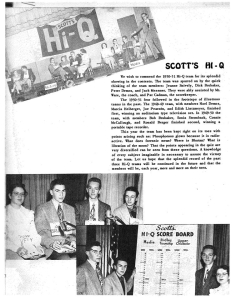 The program became increasingly popular over the years and in the 1970’s Donna Zerby, manager of Hi-Q and special projects, led the initiative to expand Hi-Q to other parts of the country. Having been involved with the program since 1962, Donna had the experience and passion to grow Hi-Q. Scott Paper plants in Wisconsin, Alabama, Maine, Washington, and Arkansas sponsored programs identical to the flagship Hi-Q. A national championship was also created during this period. As national director, Donna produced the program through the 1990s, and she continued as Delco Hi-Q director until her death in 2005.

Hi-Q is alive and well in Delaware County and in the states of Alabama, Wisconsin, and Washington.

Over the course of over 70 seasons, sponsors have changed, schools have changed, and the format has changed but the founding principles have remained…

Hi-Q is a “program that stimulates young minds and a constructive contribution to the youth of Delaware County, Pennsylvania.”

The All-Delco Hi-Q Team is comprised of one outstanding student from each participating school. Formal acknowledgment of the best-of-the-best began in 2005. Franklin Mint Federal Credit Union, Delaware County Intermediate Unit, and The Delaware County Daily Times sponsor this exclusive recognition at the annual Partners in Education Celebration.

Please check back for information about nominating your candidate in 2023.

FMFCU Foundation hosted its Third Annual Golf Classic on the fairways at Radley Run Country Club on a gorgeous day in June. With over 33 sponsoring companies and individuals and over 100 golfers, FMFCU Foundation [...]

Franklin Mint Federal Credit Union Foundation is now accepting Community Grant Applications for projects to strengthen nonprofits and enhance programs in our community. Each grant will fund up to $1,000 for a specific project or [...] 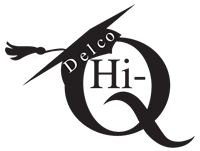 Join these Partners who support education and the advancement of financial literacy. Become a Partner 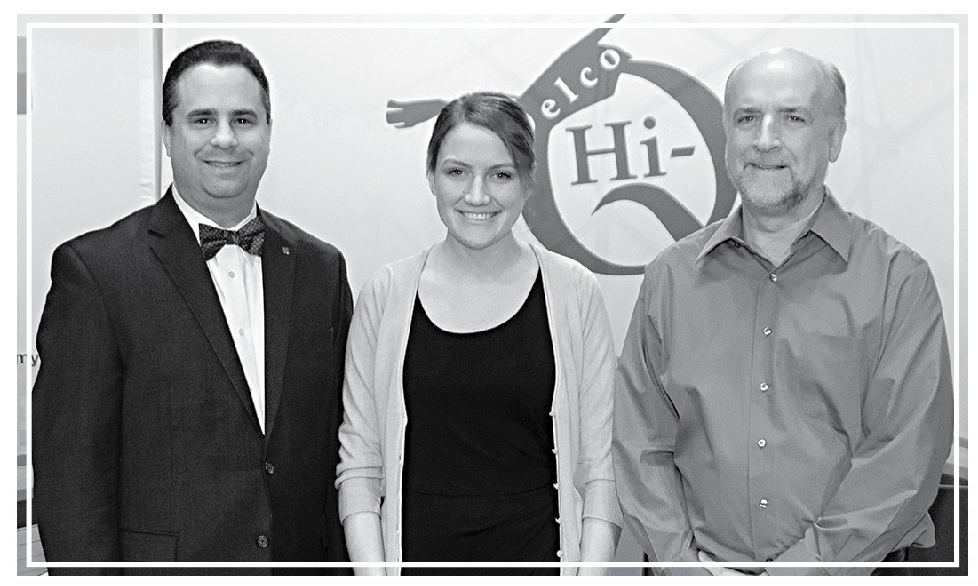 In addition to serving as the Director of Delco Hi-Q, Rick Durante is Executive Director of FMFCU Foundation, Vice President, Education at Franklin Mint Federal Credit Union, and serves on the Board of Managers of Credit Union Network for Financial Literacy, LLC Rick is also the current Board President of the Delaware County Literacy Council.

Rick has been involved with Delco Hi-Q since 2004. In 2006, the National Youth Involvement Board recognized Rick for having the largest one-year increase in the number of students reached in financial literacy seminars. In 2007 he received an Outstanding Volunteer Award from the Interboro Education Association for bridging the gap between community and school.

Rick is a Delaware County resident and a graduate of Interboro High School. He holds a B.S. in Education from Temple University.

A lifelong Delaware County resident and graduate of Archbishop Prendergast High School, Danielle earned her Bachelor of Science degree in Business Marketing from West Chester University and has a professional background in fundraising and event planning.

DAVID BRAMBLEPRODUCTION ENGINEER
David Bramble is an Information Technology Technician with Delaware County Intermediate Unit. Dave serves as the Production Engineer and makes sure that the lights work, the buzzers buzz, and everyone can be heard. None of the 25 annual Hi-Q events would go as smoothly as they do if it were not for Dave’s technical expertise.
Go to Top